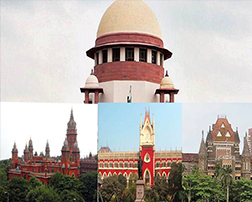 A more meaningful court: Why decentralisation of judicial powers is the way forward

[dropcap]T[/dropcap]hough recent discourse in federalism has been around devolution of legislative and executive powers, decentralisation of judicial powers is equally important. If federalism is part of the basic structure of the Constitution, then it must naturally follow that every Constitutional institution must be federal in character. Any failure to dissipate the judicial powers in a meaningful and structured manner could potentially endanger our democratic foundations.

The High Courts of Calcutta, Madras and Bombay were established in 1861. These High Courts served as the highest courts in the land until 1937, when the predecessor of the Supreme Court — the Federal Court — was set up under the Government of India Act 1935. The Federal Court, which functioned as the highest court of the land between 1937 and 1949, decided disputes between provinces and exercised appellate jurisdiction over criminal and civil matters.

In 1950, the Supreme Court of India was set up by the Constitution as the apex court and in turn absorbed the powers of the Federal Court and effectively replaced the Privy Council. The process of centralisation of judicial system, Granville Austin argues, was thus carried out not just by “the single hierarchy of courts” but by the “uniformity of law provided for by the Legislative Lists” (The Indian Constitution, 28th Impression, 2016, Granville Austin, page 207). Austin feels that the Parliamentary control of “Constitution and organisation of the High Courts” as with the “qualifications of persons entitled to practice before High Courts” concentrates the powers with the Union Legislature.

The primary focus of the Constituent Assembly Debates surrounding the judiciary was to ensure and safeguard its independence. The independence of judiciary was reiterated by the Sapru Committee as well as the Ad Hoc Committee of the Supreme Court in their reports to the Constituent Assembly. The Draft Constitution, especially the provisions relating to judicial appointments, was discussed by the justices of the erstwhile Federal Court and chief justices of the High Courts. Austin says that the sense of the meeting was that the “fearless functioning of an independent, incorruptible and efficient Judiciary” must be preserved.

Autonomy of State in judicial branch: The Rajamannar Committee report

The Government of Tamil Nadu, under the Dravida Munnetra Kazhagam (DMK), set up a three-member Inquiry Committee under Justice Dr P V Rajamannar to consider the Centre-State relations in general, but also to suggest measures necessary for securing autonomy of the State in the judicial branch. The Rajamannar Committee submitted its report to the Government of Tamil Nadu on May 27, 1971 and recommended certain germane changes to the functioning of the judiciary.

The Rajamannar Committee suggested that “Supreme Court must not be burdened with the task of interpreting State enactments” and the ruling of the High Court in such matters should be final. This suggestion finds basis from the fact that State legislations, Ordinances and Government Orders are limited to the territory of the State and, by extension, fall within the jurisdiction of the respective High Courts. Therefore, the judicial work of interpreting the State laws should be vested finally with the jurisdictional High Courts.

Origin of appeals to Supreme Court

Independent research work led by Nick Robinson on the origin of appeals to the Supreme Court in the years between 2006 and 2011 shows that more than 50% of the cases come from the High Courts of Punjab and Haryana, Delhi, Bombay and Uttar Pradesh. Only around 5 % of cases in the Supreme Court originate from the Madras High Court and the corresponding number for Calcutta High Court is around 2.5%.

The same research also shows that ordinary criminal and civil appeals clog the Supreme Court at the stage of admission. Perhaps, it is with the benefit of such knowledge, the Law Commission of India, in its 229th Report recommended that a “Constitution Bench” be set up at Delhi to deal with Constitutional and other allied issues and “four Cassation Benches” be set up in the Northern region at Delhi, the Southern region at Chennai/Hyderabad, the Eastern region at Kolkata and the Western region at Mumbai — to deal with all appellate work arising out of the orders/judgments of the High Courts of the particular region.

While the Full Bench of the Supreme Court rejected the recommendation of the Law Commission, the issue continues to be alive due to a recent Writ Petition (WP (C) No. 36 of 2016) filed before the Supreme Court. In this Writ Petition, it was argued that, “on account of the distance at which the Supreme Court is located from other parts of the country, access to justice had been adversely affected” and that setting up “regional benches of the Supreme Court” was the way forward. Taking in to account these matters of constitutional importance, the matter has now been referred to a Constitution Bench for authoritative pronouncement.

While the issues of political federalism are more or less settled in favour of greater decentralisation, the questions surrounding judicial federalism and devolution of powers among the courts have not been considered sufficiently. For the court and its processes to be more meaningful, effective and credible, all relevant questions must be settled, without compromising the independence of the institution, at the earliest.

Treat sex workers with dignity and educate them about their rights, Supreme Court directs all states and union territories

Is Section 6(a) of Hindu Minority and Guardianship Act prejudicial to fathers?

Join millions of others and stay up to date with the latest developments.
Naxcent Consulting